The Radicalization of Hillary and the Democrat Party (PART 2 OF 2)
Saturday, April 16, 2016 by Christine 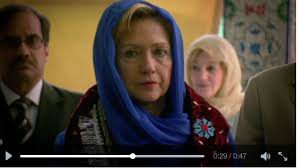 While Hillary Clinton panders to the poor and minority vote isn’t it interesting that she doesn’t hold the racist, Black Lives Matter activists accountable for disruptive appearances at Republican rallies? By unrelenting focus on racism, racial and income inequality, and accusing the other party of not only CAUSING IT BUT NOT CARING ABOUT IT, the result is to harm not heal, to divide, not unite. If you pound people with the message they suffer because of the color of their skin, that those who just happen to have a lighter paint job are privileged and need to admit it, apologize for it and make reparations for it, you create an angry, entitled and growing entity of citizens who are hostile, resentful, discontent and who will choose to segregate themselves.

But more than this, you also make God and His Word out to be lies.

It is Democratic-ignored GOD who creates all life, races and ethnicities as He chooses. He “knits us together in our mothers’ wombs.” (Psalm 139:13) It is GOD who says, “But who are you, a human being to talk back to God? Shall what is formed say to the one who made it why did you make me this way?” (Romans 9:20) It is GOD who “shows no favoritism.” (Acts 10:34) It is GOD that says, “If one does not work, he shall not eat.” (2 Thess. 3:10). It is GOD who says, “You will ALWAYS have the poor among you.” (Deut. 15:11) It is GOD who says that He “will provide for all of our needs” (Phil. 4:19) NOT THE GOVERNMENT. So why is such a huge segment of our nation making government its God? Why are these truths completely DISASSOCIATED from an entire party? Why are these not taught and lived out?

In my experience, the black population has usually been a “churched” population. If you are an African-American reading this, come on, you know it’s true. You may have to go back a generation or more, but in general, I have seen the most dynamic, spiritual and Godly people in some black churches I have attended. For that matter, generations of Europeans and other groups can look back and see that the God of the Bible mattered. HE mattered to the framers of our Consitution which many believe is God-inspired. HE mattered in our government offices, on our currency, to our families as the One worshipped, prayed to and relied upon. Why is this population following after a godless Hillary? Or listening to Al Sharpton? Or why is any segment of society putting its faith in bigger government, more taxes, more control coming from a Democrat party?

What WILL heal a nation and make it whole is God. “If my people, who are called by my name, will humble themselves and pray and seek my face and turn from their wicked ways, then I will hear from heaven, and I will forgive their sin and will heal their land.” (2 Chron. 7:14).

But Democratic candidates find the God of Christianity, the one who has blessed this country for hundreds of years now passé, discriminatory, offensive even.

NEWS FLASH: Christianity IS offensive. It’s offensive to the sinner, the proud, large numbers of Democrats—and, lest I point a finger at just one candidate or party—some Republicans and Independents as well. Hollywood is at the top of the list, in their wealthy, vain and sheltered elitist club. They, who say we are too intelligent, tolerant, inclusive or even compassionate to follow the God of the Bible. They, who will not find work if they even IDENTIFY as a Republican or Conservative. Surely, a sort of spirituality is cool. Lack of faith is valid. Surely everyone’s lifestyle is a right. And any politician who even mentions the Christian’s God is certainly a right-wing, bigoted nut out to jeopardize millions of people’s values and liberties. NO. Ted Cruz did say that everyone—from the Christian to the atheist to the Muslim is protected by our Constitution.

However, The ONLY faith that includes a Savior who died for our sins and rose again is the Christian faith. It is the only one that gives its followers the Great Commission to “Therefore go and make disciples of ALL nations baptizing them in the name of the Father and of the Son and of the Holy Spirit.” (Matthew 28:19) Not go out and barbarically murder anyone who disagrees with it. Yet this is the religion Hillary wants to protect, to elevate. Fifty-eight percent of Muslims in this country disagree with the First Amendment right to criticize Islam. Forty-six percent think “blasphemers” should be punished. Twelve percent think blasphemers should be put to death. Yet, like Barack, she shows solidarity with Muslims with trips to mosques and cannot lecture a nation ENOUGH about its terrible, unjust racist self. It is destructive for a politician to perpetuate racism for votes. Diabolical, even.

There is an expression that “all roads lead to Rome.” The message is that you can take a thousand different routes as long as you end up at your intended destination. Yet God says, “Enter through the narrow gate. For wide is the gate and broad is the road that leads to destruction, and many enter through it.”