The Radicalization of Hillary and the Democrat Party (PART 1 OF 2)
Friday, April 15, 2016 by Christine 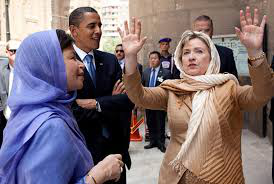