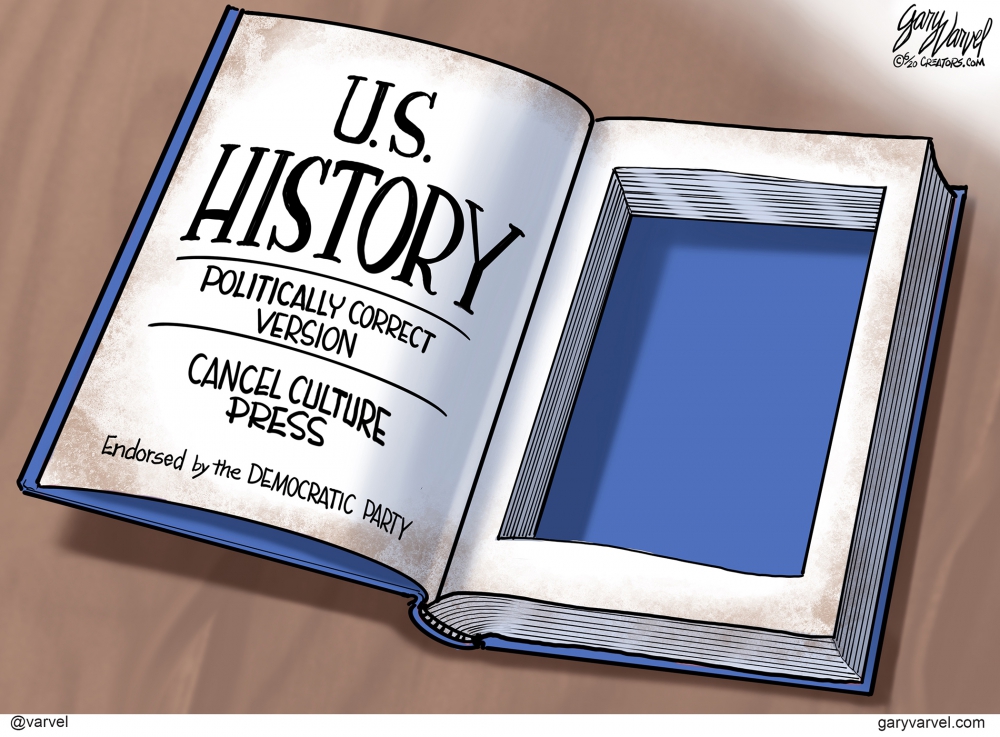 Cancel culture is a war on freedom of speech. The aggressive mob denominations of Scientism like the Marxist Black Lives Matter, Feminaziism, Climate Change Hysteria and Socialism all demand compliance from society while freedom of speech preserves liberties of a society. The former plunder minds. In doing so, conquest of land, possessions, money and children’s thoughts and corresponding actions will be theirs. Through intimidation and force even at the earliest levels of education, they have been effective at stopping debate through suppression and distortion of what others even allow themselves to think.

Founder Benjamin Franklin could have been portentously warning about cancel culture when he said:

Shutting down the free exchange of ideas is close-minded, willful ignorance. For far too long the country has allowed a chipping away of liberty in its breeding grounds of academia and Hollywood until it became arrogance, condemnation, punishment and violence towards opposing views. These are the ingredients of intolerant, bloody revolution that we have seen in brutal dictatorships leading to mass graves. Immutable characteristics or style of dress are now enough to put one in danger for presumed thoughts. That is where America is at, in a nation framed for independence and freedom from tyranny.

When the Founders, from the very gospel foundation they used to frame America, talked about wisdom, they meant the wisdom that comes from the mind of God, not vain imaginations of men. Lack of Godly wisdom leads to ignorance and emotion to guide actions.

Cancel culture is out-of-control emotion with blinding anger at the top of the list. It does not peaceably assemble, but overwhelms the public square with destructive chaos and confrontation. The neverending issues it claims demand justice often appear as a schizophrenic buffet of grievances propelled by paranoia. Paranoia that believes others are a threat to one’s very existence drives a desperate and angry mind to annihilate opponents before it can itself, in its faulty thinking, be destroyed by that opposition’s dangerous thoughts spoken aloud. During more than half a year of Marxist Black Lives Matter raging throughout the nation with their convert or die mentality, twenty-four-year-old Caucasian mother Jessica Doty Whittaker was murdered in Indiana. Her crime? Saying aloud, ‘All lives matter’ in violation of the lunatic mob-proscribed, ‘black lives matter’ cry. No outcry from the ruling class, no coverage by the media, no calls for the nation to mourn her death and pray for her family. Where on earth is the justice in that?

Cancel culture is progressive propagandizing of the masses using heavy doses of fear. By their ignorant and fearmongering calculations, we have but nine years left before ‘lack of justice’ for the planet from weather conditions Americans are globally responsible for, destroys it. Climate justice warriors don’t use terms like Conservation of natural resources that most can agree on, but jargon like ‘existential threat,’ our ‘Pearl Harbor,’ and ‘We’re all gonna die.’ Around since the 1970’s, narratives of an impending ice age, to global warming, to an abstract ‘climate change’ have launched a highly effective terror campaign on even the most educated of persons. Yet, if radicals truly believed the oil and gas industries were a threat, they would not be pro-open borders as most are. There is no wisdom in eradicating borders to a massive influx of people from third world nations who will buy more cars, fly more planes, heat and cool more residences and generate more garbage.

‘Climate justice’ is manipulative language intended to weaponize weather so that the masses will beg government for safety from floods, hurricanes, wildfires and heatwaves—the Capitalist’s fault. The government wishes to comply by restricting freedom of mobility, imposing carbon taxes and making running a small business or building anything without onerous regulations and costs impossible. Government really becomes the devil disguised as an angel of light. People think of it as a savior and its inflated ego makes it think of itself as God-like, capable of saving an entire planet from unpredictable weather events. Their God-complexes negate the wisdom of the cross. Jesus did not come into the world that man might save the planet, but that He would save humanity on the planet. {John 3:17}

Climate change warriors have in essence:

…exchanged the truth of God for falsehood, by worshipping and serving created things, rather than the Creator.’ {Romans 1:25}

Where they find disagreement of opinion on this issue though a knowledge of climatology, physics and geology would be necessary, as well as Godly wisdom capable of discerning truth from propaganda, radicals believe their very survival is threatened.

Overall, Scientism’s lack of wisdom is farcical deception, instigated by political and corporate elites, big tech and institutions that use fear to control people. They have created a culture of division and shaming. They elevate certain swaths of the population by bringing down others. Fairness and individual liberty cannot exist in such an atmosphere. The assertion that ‘All men are created equal’ in our Declaration of Independence and derived from the mind of God dissolves.

Cancelers are actually the most racist and bigoted people in society. With God there is no partiality, no favoritism shown towards people that are more loveable than others for their skin color, economic status, jobs, lifestyles, hobbies, thoughts or speech. The idea that we can achieve justice by resurrecting prejudice towards some to favor others is at the heart and soul of racism that America has largely overcome. You cannot root out injustice by administering it as a cure.

Though our government, institutions and highest court in the land did not grant equality to all in the past, cancelers are stuck there, refusing to acknowledge that as a society we have advanced to recognize and undo moral and ethical wrongs. Marcus Tullius Cicero said, ‘To be ignorant of what occured before you were born is to remain always a child.

We have watched ongoing juvenile toppling of statues of any flawed, complicated person who existed before right now. {That would be any human that ever walked the earth}. Even Abraham Lincoln’s statue is desecrated and flung down in ridiculous tantrums against a President who freed the slaves and said that the blood of seven-hundred-thousand men spilled during the Civil War was the just reparation for the sin of slavery. Cancelers want to pretend these things never happened that we might forever live in a system of oppressors and the oppressed with no chance to ever make enough reparation for those who were never enslaved by those who never owned slaves.

Cancelers are unable to understand that all humans, most notably themselves, are inherently sinful and that as long as humanity exists, you cannot purge the racism or bigotry out of three-hundred-and-thirty-million people in a country. In a land with a Bill of Rights, individuals are granted the freedom to state things that are anathema to others. One of the gravest miscarriages of justice by cancellers is to forbid young minds to think and speak freely, welcoming their mistakes and offenses so that they might develop the critical thinking skills that bring them to wisdom and maturity. You can hear it in our youth’s answers to questions about why they adhere to the tenets of Scientism. The planet is dying because…ninety percent of scientists agree. Minorities are victims because…white people are privileged. Open borders are good because…restricting illegal immigration is racist. Abortion is a right because…women should be free to choose. Beyond submission to broad, false narratives mimicked from the mouths of their bully preachers, they cannot formulate cogent, informed thoughts and speech to substantiate these claims.